Down to the Wire

The Difference between Twisted Pair, Coaxial and Fiber Optic Cables

Most of us know the general distinction between ADSL, COAX and Fiber internet, but the cabling behind these connections may be more of a mystery. The three most common types of communication cables are Twisted Pair, Coaxial, Fiber Optic.

Understanding the differences between the three will shed light on how data travels through each cable, which ultimately affects your connection and things like speed, latency, security, cost, etc. Here is a general breakdown of the three different types of cable systems and what they are capable of: 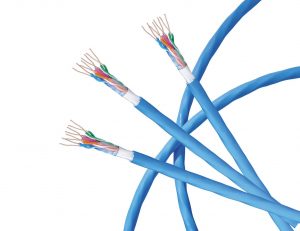 Coaxial cables are high-frequency transmission cables made up of a single solid-copper core. Data is transferred electrically over the inner conductor and has 80X more transmission capacity than twisted pair cables.

This type of cable is commonly used to deliver TV signals (its higher bandwidth makes it more suitable for video applications) and to connect computers in a network. Along with stable transmission of data, coaxial cables also have anti-jamming capabilities and can effectively protect signals from being interfered. The cost is slightly higher than twisted pair but still considered more economical than fiber. There are also two types of coaxial cables: Fiber is the newest form of  transmission cable technology. Instead of transferring data over copper wires, these cables contain optical fibers that transmit data via light, rather than pulses of electricity. Each optical fiber is individually coated with plastic layers and contained in a protective tube, making it extremely resistant to external interference. The result is a very reliable and super fast connection that has 26,000X more transmission capacity than twisted-pair cables, but that also comes with a much higher cost. Again, there are two types of fiber cables:

Thinking back to grade school and the Goldilocks and the Three Bears analogy, all three types of cable offer something different. One might be too hot, the other too cold, and hopefully after learning about the differences, you’re able to find the type of system that’s just right for your networking needs.

Let’s find the best internet for your organization.

How to Setup a Distributed Team for Success | Part 3

How to Setup a Distributed Team for Success | Part 2

How to Setup a Distributed Team for Success | Part 1

Bundle up and protect your business against DDoS attacks.

iTel is a national provider of business services, including voice, connectivity, networking, and cloud. As a converged network company, we harness the power of every Canadian carrier and every technology to create an affordable network solution for any sized business – in even the most remote locations across Canada and the US.